There’s no real way to sugarcoat this.

I do eat meat from time to time, but when I do, I tend to use it as a flavoring and I typically don’t make it the main event. An exception would be the lamb shanks that I posted a pic of a few weeks ago, and the chicken below. On the other hand, while I love a good steak or hamburger on occasion, you won’t find recipes for those on the blog because they’re not interesting to me from a culinary point of view. They basically boil down to “slap a piece of meat on a pan or a grill, season with salt and pepper, then cook until done”.

That being said, if you’re a vegan or vegetarian, you’ll probably want to skip this post.

This is what happens when you have some braised lamb shanks and you don’t feel like having leftovers for dinner. Add a handful of beans cooked from dried, some aromatic winter vegetables (celery, fennel, cauliflower) and you’ve got another dinner makeover. 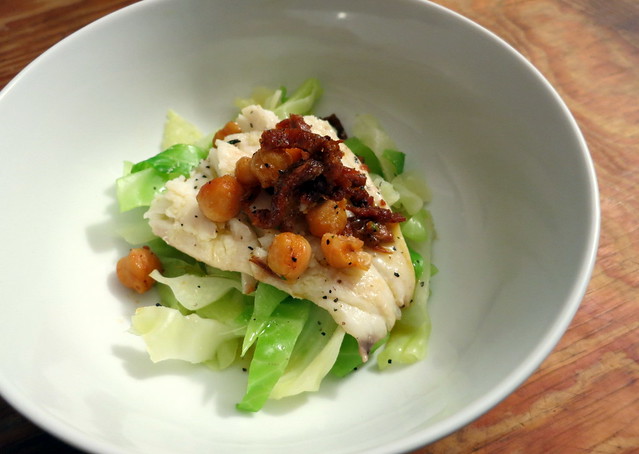 Poaching fish and seafood in olive oil isn’t a new technique. It produces moist and flavorful fish in a way that frying, baking and broiling sometimes doesn’t. You can infuse the oil (as I did) with herbs, garlic or chiles. Once the fish is done, you can reuse any remaining oil to (1) poach additional fish, (2) dress steamed vegetables, (3) as an ingredient in a vinaigrette or (4) as part of homemade mayonnaise.

The chickpea garnish in the photo consisted of chickpeas cooked in a little bit of the poaching liquid, along with garlic, Spanish paprika and chopped Spanish chorizo. 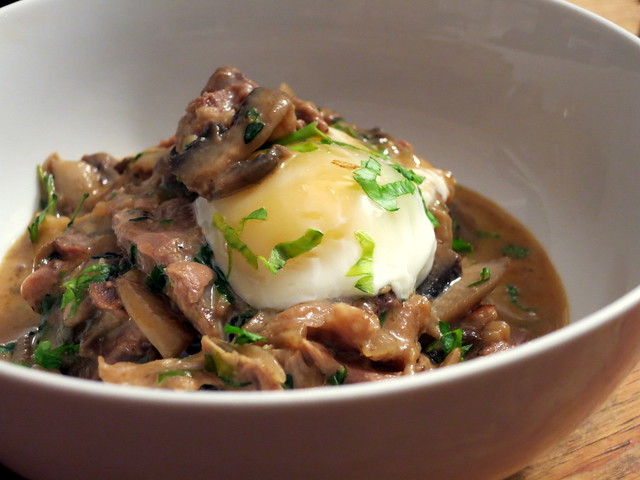 Jowl bacon is another name for bacon taken from pig cheeks. In the southern United States, the term for it is “hog jowl”. You may know it better as ‘guanciale’. It may also appear as part of a traditional full English breakfast or as seasoning for a pot of collard and turnip greens.

The chicken livers were sautéed in melted unsalted butter until brown, then set aside. Next, finely chopped jowl bacon was added to the pan, fried until crisp, then removed. Next, chopped garlic and shallots were sautéed in the bacon drippings and the pan was deglazed with a mixture of port wine, sherry vinegar, sea salt and black pepper.

The grapes were seedless red grapes that were tossed in olive oil and sea salt, then roasted for 15 minutes at 375 F.

Otherwise known as bái qie ji, this is chicken that was poached in water infused with peeled, crushed garlic cloves and sliced ginger.

A nice bonus is that in addition to a moist, juicy and flavorful bird, you also have a pot of Chinese chicken stock available for future use.