On Facebook, someone mentioned how the style of my cooking so often can be tracked to old-time Italian country cooking.

At the time the recession of 2008 hit, I started to eat less meat because of how much it cost. At the same time, I also made a change in how I cooked. Practically everything I make follows a strictly seasonal pattern since I buy produce from my farmers’ market all year round. Another reason is that shortly after I made those two changes, I was attracted by the idea of “cucina povera” — again because of costs, but also because you could make do by creating something wonderful out of practically nothing. That was the genesis of my foodblog.

My style leans strongly towards “vegetable-focused” cooking. That means, dishes and meals where vegetables are the star of the show. That doesn’t necessarily mean “vegetarian”, by the way. Sometimes meat will be present, either in very small amounts or used as a flavoring rather than as a main ingredient.

A note on terms: while I am an omnivore, about 80% of the time I’m a lacto-ovo vegetarian. In other words, I consume milk, dairy products and eggs, in addition to things that vegans and vegetarians include in their diets. On the other hand, I have been subconsciously gravitating towards eating less meat over time. It works for me.

My farmers’ market is in full swing these days, which is great, because I can plan meals based on what’s available rather than relying on the usual trope of “protein, starch and token vegetable”. 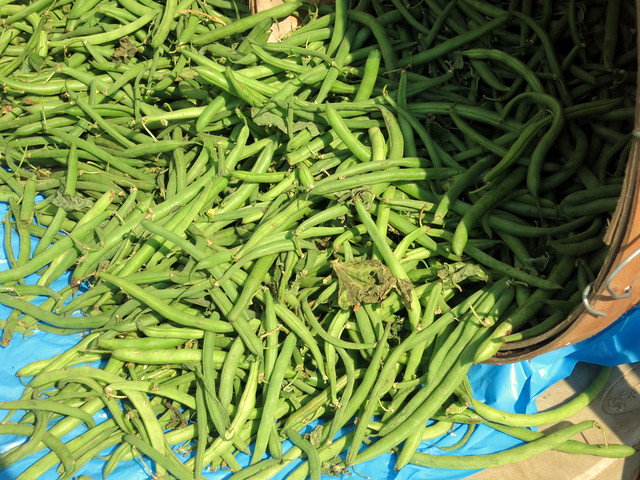 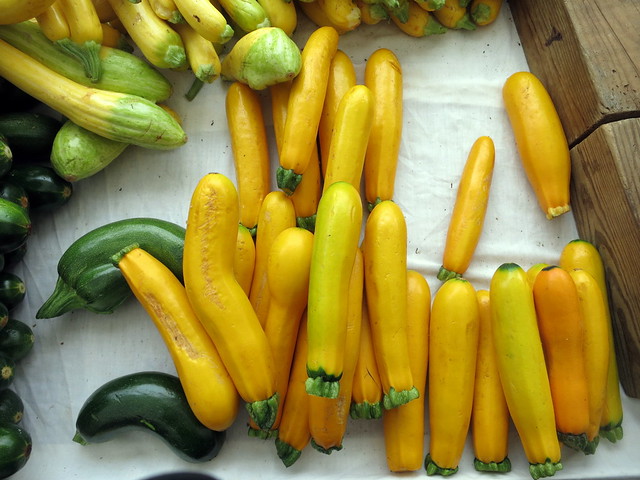 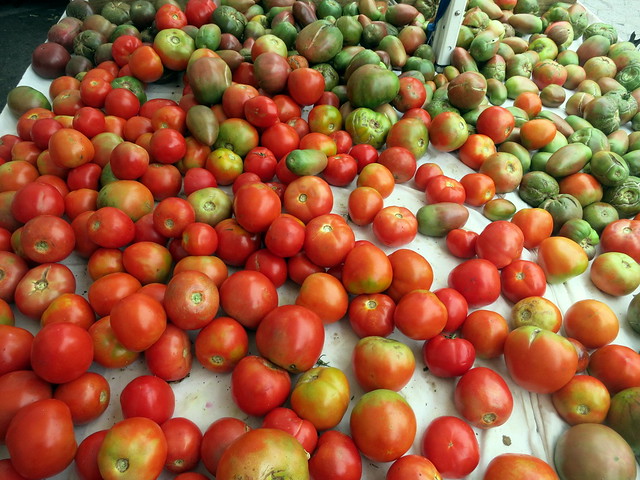 When green beans appear, that’s when I know that summer has really hit its stride. They form the backbone of many seasonal favorites, from Fagiulini Spilusieddi (“green beans with onion and mint”) to Fagiolini e Patate (“green beans and potatoes”). I adore them when they’re braised in tomato sauce. Add a couple of poached eggs or a plain omelette and some bread, and you’ve got the makings of a lovely meal. 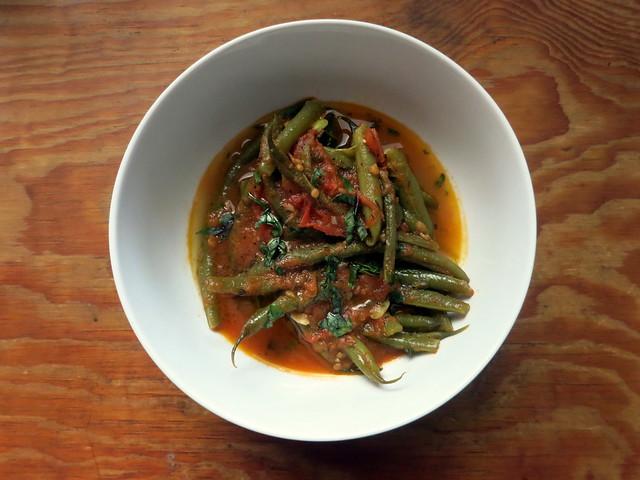 Adapted from this recipe by Mark Bittman.

There are many ways to make fagiolini e pomodoro. This is one method that doesn’t involve blanching the beans.

Add some olive oil in a saucepan, then the garlic, then warm over medium heat. 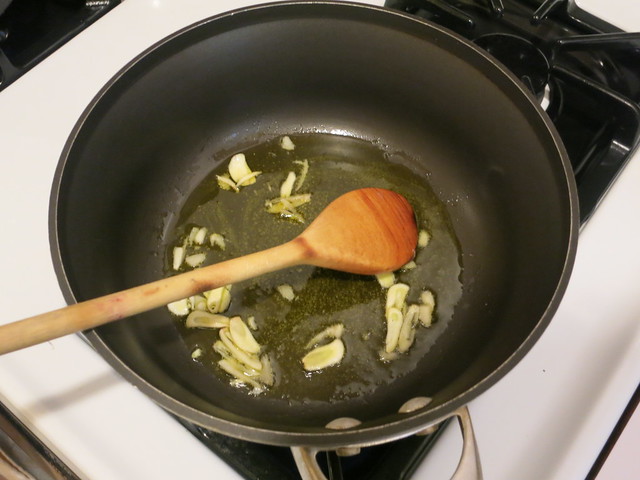 Tip: If you warm the oil and garlic from room temperature, the garlic will infuse the oil with its flavor and aroma better than if you had added chopped garlic to already heated oil.

Once the garlic turns color (that is, once it becomes a pale gold), add the shallot and fry until they become translucent. 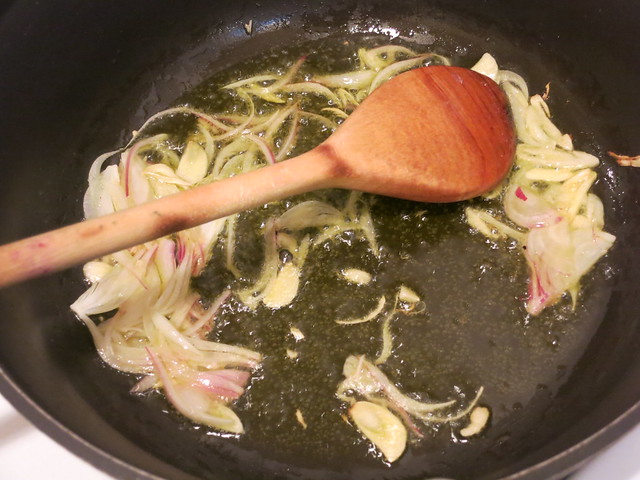 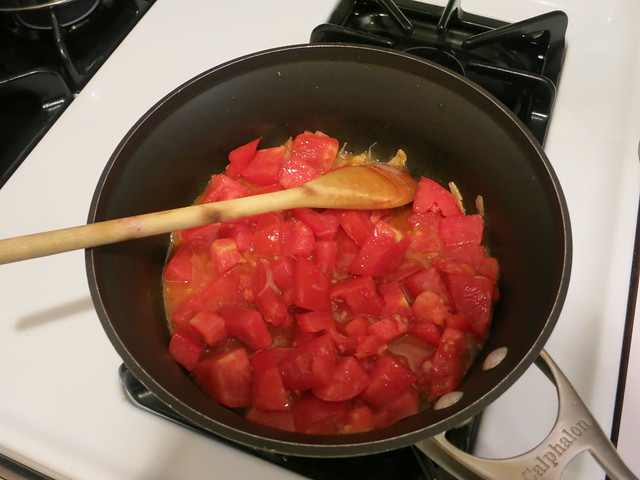 This is about 3 medium-sized diced Jersey tomatoes. I didn’t bother with removing the seeds and peel as indicated in Mark’s original recipe. You lose too much “good stuff” that way. 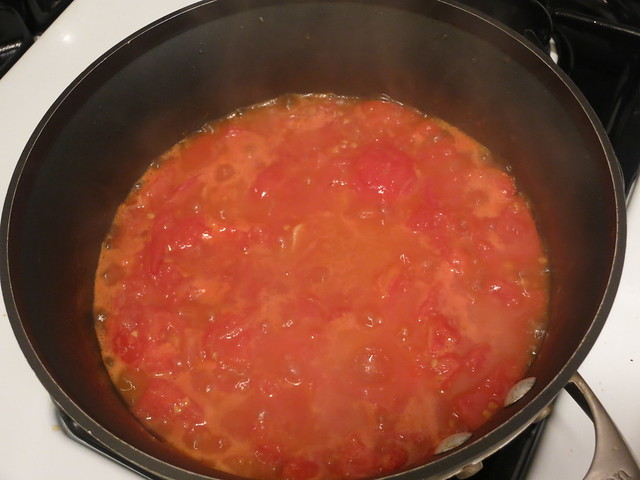 Let the tomatoes break down a bit, then add the green beans. Mark’s recipe instructs you to have the juices reduce, but as you can see, I went a different route. Since the beans will be braising in the tomato sauce, you want some liquid in the pot. Season to taste with salt and pepper. 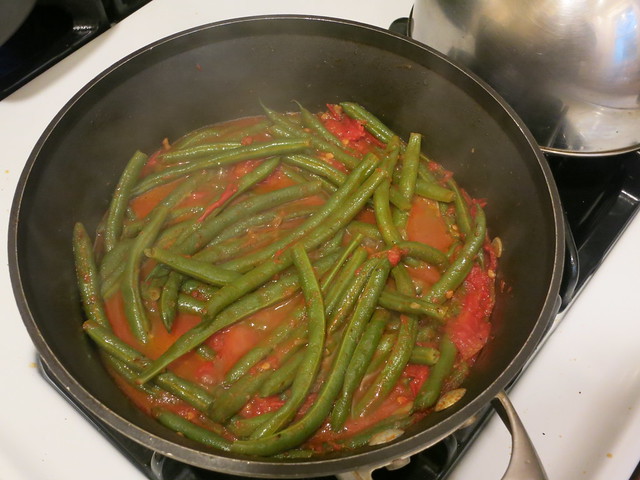 Cover the pot and braise on low heat for one hour. This instruction differs significantly from the recipe I linked above; you may decide you don’t want the beans to cook for an hour, and that’s perfectly fine.

HOWEVER…there was a Saveur article that was published a while back about the difference between the way we cook vegetables in the United States, and how Italians generally prefer theirs. Some people who are less charitable might say these beans are “overcooked”, but that’s the point of this dish; the beans need to be braised that long in order to achieve a texture I routinely describe as “silken”.

Towards the end of cooking, add some chopped basil, then taste for salt and pepper. 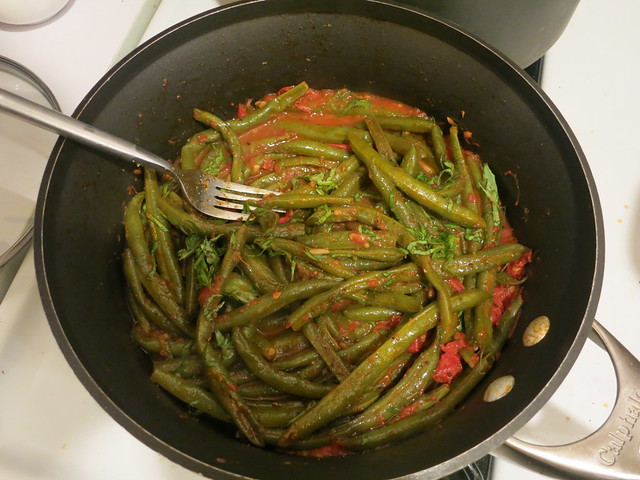 Drizzle the beans with a little extra-virgin olive oil, then serve at once.

This recipe is sized for up to 4 people.