Mejadra, with Yogurt and Cucumber

Rice and beans (or peas, or lentils) is a tradition in just about every region I can think of, from the American South (red beans and rice), to India (chana masala, dal and rice), to the Caribbean (Puerto Rican arroz con gandules, Jamaican rice and peas) and points beyond. You can make it with or without meat. It seems to me that if people use meat in this way, it’s more typically used as a flavoring or as a way to stretch a small amount for a few meals.

Various combinations of rice and legumes form a complete protein which provides many amino acids the human body cannot make for itself. In addition, they are common and affordable ingredients, often available in difficult economic times.

There’s a scene in the movie Big Night where a diner requests a side order of spaghetti with a plate of risotto. The backstory is that the movie is set in New Jersey, in the late 1950’s when the U.S. was just awakening to the possibility of encountering good food beyond the usual tired culinary genres.

“She wants starch with starch?” –Primo

Sometimes the starch likes to be alone, and sometimes it wants to be paired with its complement. That’s what Monday night’s dinner was all about. 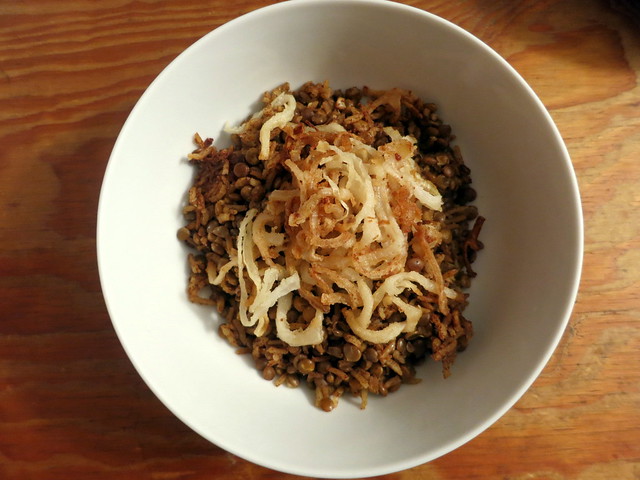 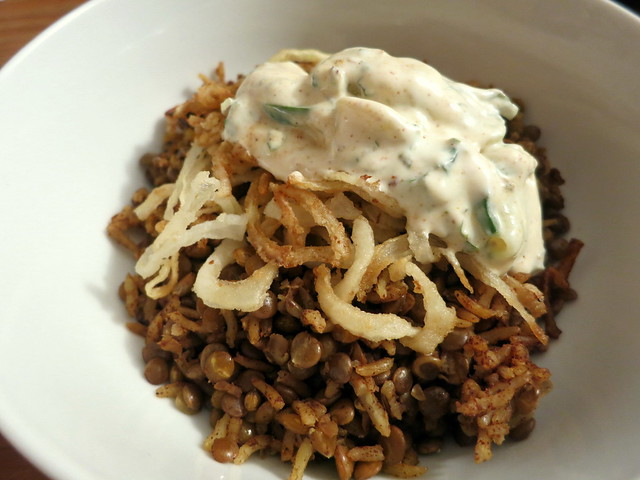 Mejadra with Yogurt and Cucumber, adapted from Jerusalem, by Yotam Ottolenghi and Sami Tamimi.

It seems I’ve been making mujadara wrong all this time (for years, actually). The steaming part, detailed below, was new to me.

Note: The original recipe calls for 2 teaspoons cumin seeds but I had none on hand. Ground cumin is fine; about 1/2 teaspoon should do the trick.

Place the lentils in a small saucepan, cover with plenty of water, bring to a boil, and cook for 12 to 15 minutes, until the lentils have softened but still have a little bite. Drain and set aside. 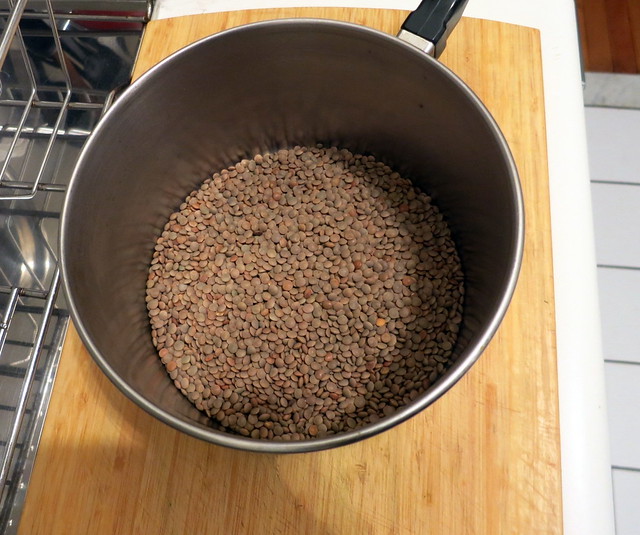 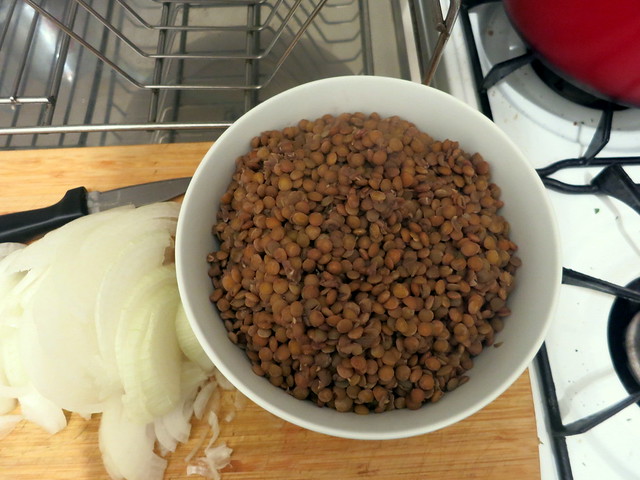 Peel the onions and slice thinly. Place on a large flat plate, sprinkle with the flour and 1 teaspoon salt, and mix well with your hands. Heat the sunflower oil in a medium heavy-bottomed saucepan placed over high heat. Make sure the oil is hot by throwing in a small piece of onion; it should sizzle vigorously. Reduce the heat to medium-high and carefully (it may spit!) add one-third of the sliced onion. Fry for 5 to 7 minutes, stirring occasionally with a slotted spoon, until the onion takes on a nice golden brown color and turns crispy (adjust the temperature so the onion doesn’t fry too quickly and burn). Use the spoon to transfer the onion to a colander or plate lined with paper towels and sprinkle with a little more salt. Do the same with the other two batches of onion; add a little extra oil if needed.

By the way, I thought that this step was a little tedious. I wanted to make the recipe as written so I could say I tried it and found it wanting. Next time (and there will be one, b/c I think the recipe is otherwise faboo), I’ll slow-cook them over low heat until golden brown. 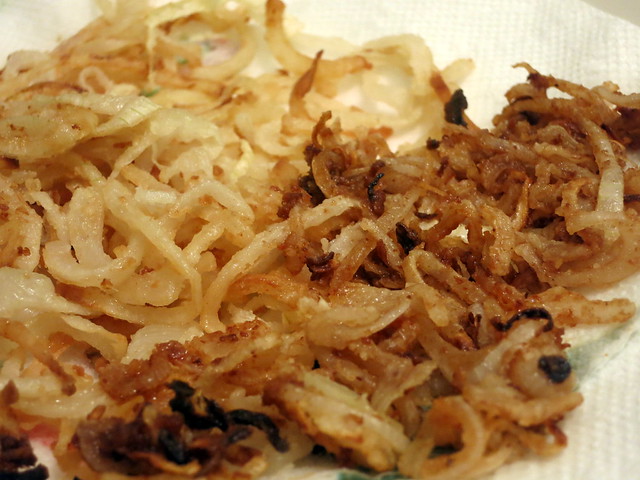 Wipe the saucepan in which you fried the onion clean and put in the coriander seeds. Place over medium heat and toast the seeds for a minute or two. 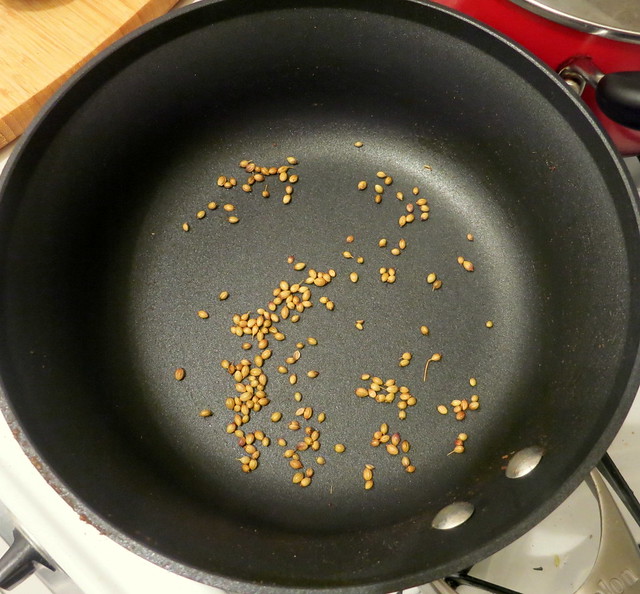 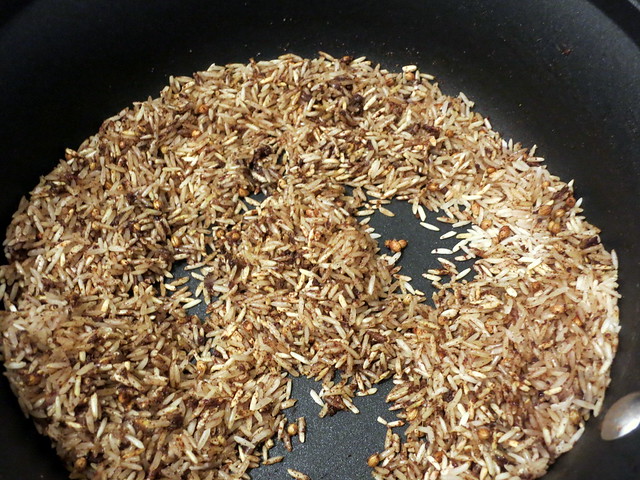 …and then add the cooked lentils and the water. 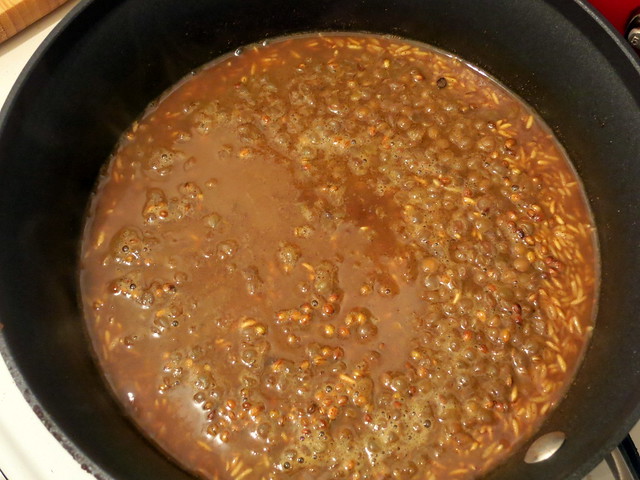 Bring to a boil, cover with a lid, and simmer over very low heat for 15 minutes.

Remove from the heat, lift off the lid, and quickly cover the pan with a clean tea towel. Seal tightly with the lid and set aside for 10 minutes. 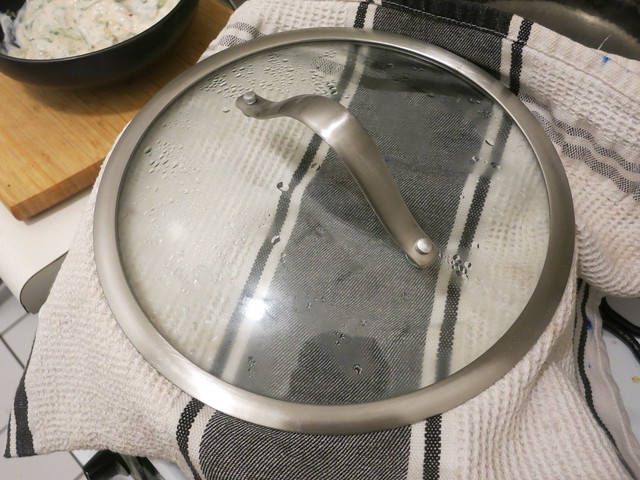 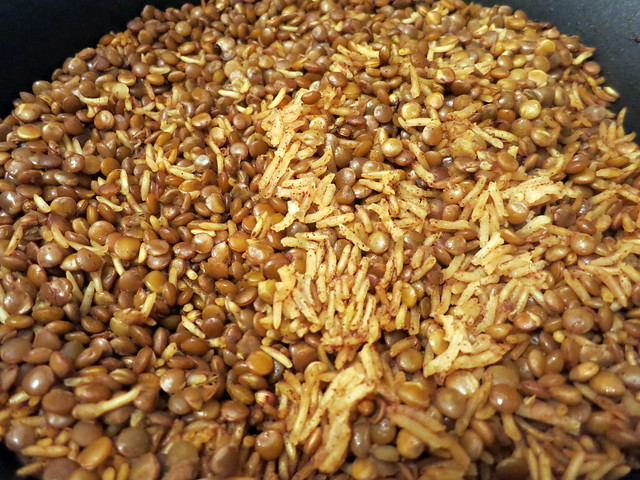 Finally, add half the fried onion to the rice and lentils and stir gently with a fork. Pile the mixture in a shallow serving bowl and top with the rest of the onion. 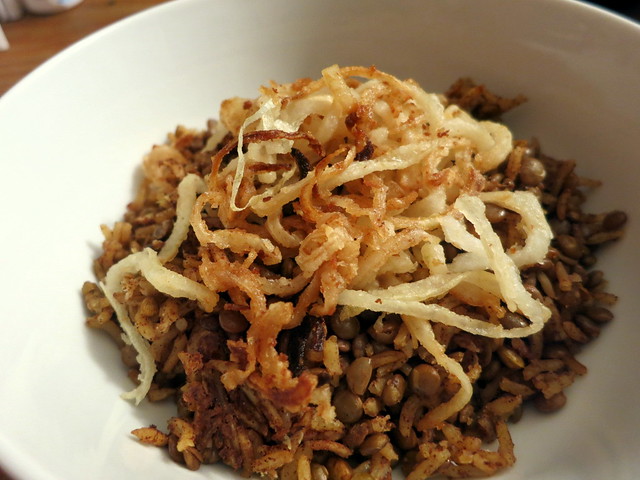 Ottolenghi provides a recipe (page 299) for a yogurt and cucumber salad. I decided to modify it a little bit: slice a cucumber thinly, then combine with 1/2 cup Greek yogurt, a pinch of salt, 1 tablespoon chopped fresh mint and 1 teaspoon filfel chuma. Mix well. Filfel chuma (alternately known as “pipelchuma”) is a Libyan Jewish chile paste that’s reminiscent of harissa. You can find it ready-made at specialty food shops or make your own.

Time: About 1 hour, 15 minutes, including prep.

This recipe is sized for up to six people.