I’ve been living in this country for a very long time, and I still can’t get used to winter. Temperature-wise, it’s my least favorite season of all. I much prefer spring and autumn; they’re at least bearable.

I used to think that winter was the least interesting season, as far as cooking was concerned. Then, I woke up. Its joys are about comfort and warmth. They’re about chicken soup, laden with fat noodles and flecks of parsley. If you’re adventurously inclined, perhaps it’s a Chinese version that contains black chicken and pork knuckle. (Don’t let the picture fool you. I grew up eating this stuff.) 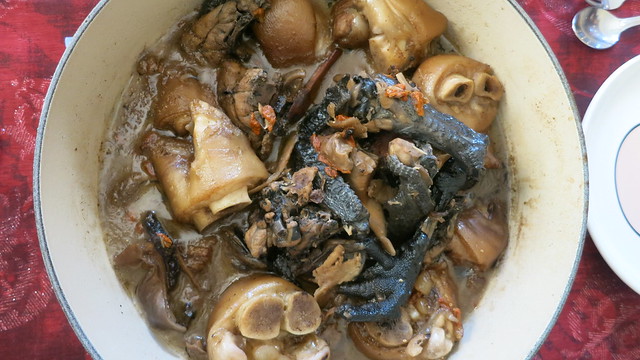 They’re about braised lamb shanks, the meat nearly falling off the bone in tender ribbons, shot through with cardamom and sweetened with prunes and honey. Stews and soups are the soul of winter, and a reminder of what awaits at home for supper.

On Facebook, I promised Amelia that I would help spread the word that winter is not a giant cup cold, gray suck during January and February while we wait for the first green things at the market that whisper of spring. 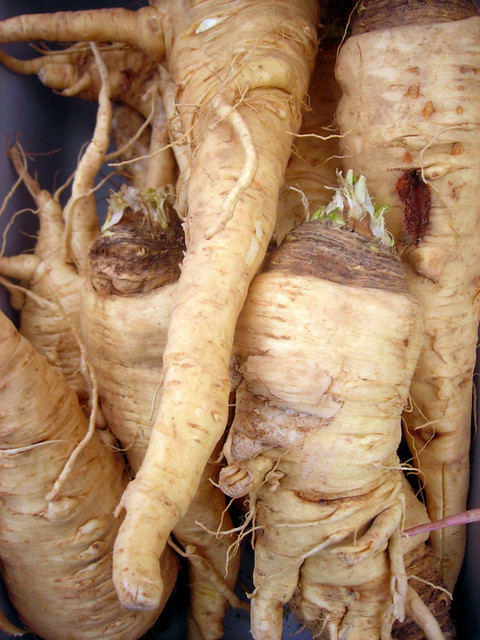 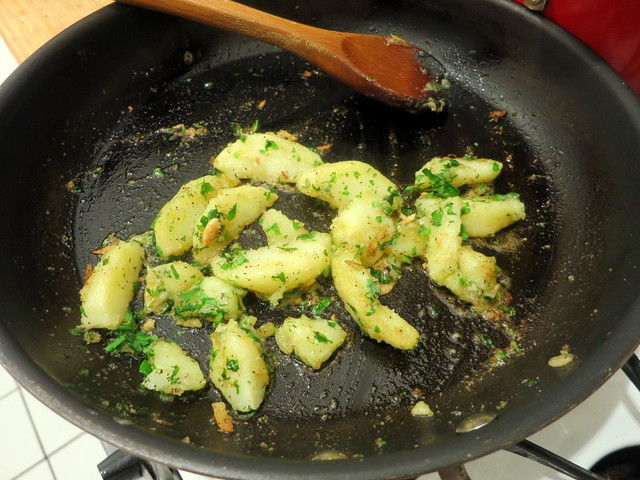 The challenges of winter cooking requires a different kind of palette than one you might be used to at other times of the year. Imagine stacks of roasted potatoes, burnished gold from the oven, crisp on the outside and creamy within. Perhaps it’s carrots bathed in olive oil and citrus, slow-cooked until they become luscious like silk. Parsnips are pale white, gnarly roots that remind me of a carrot’s older brother; they’re as sweet as candy and often appear for breakfast. Cabbage paired with pork fat becomes meltingly soft. Generations of Austrians know all about cabbage strudel, where layers of flaky, buttery puff pastry enclose shredded cabbage suffused with the essence of bacon. It’s a treat that not enough people know about. 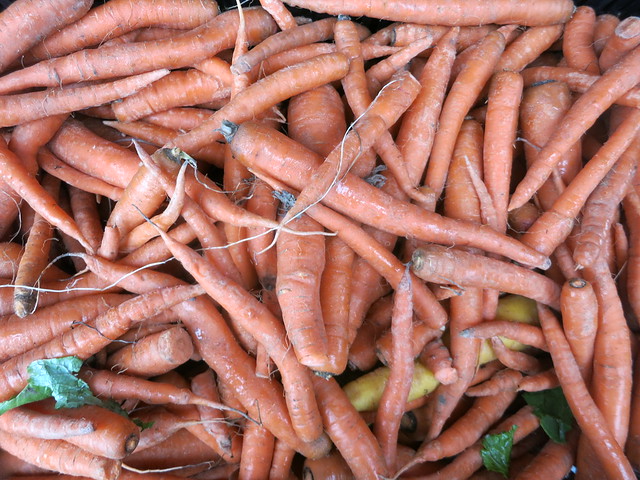 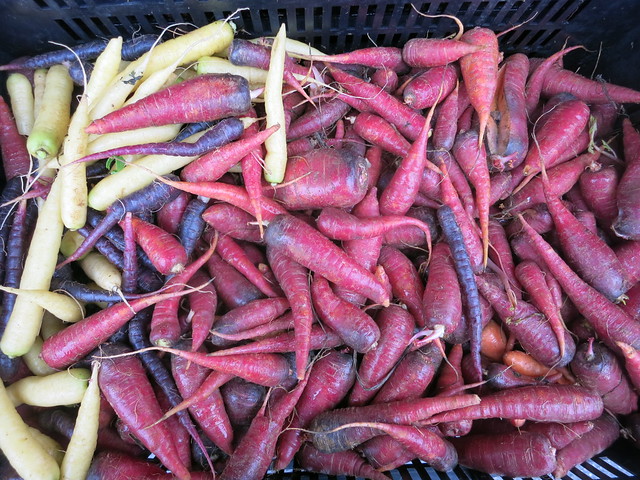 Most of you may associate brussels sprouts with that unique American holiday known as Thanksgiving. Or if you have ever lived in England, perhaps they remind you of a boarding school in a previous century. If you grew up during the ’50s, you may think of them as nuggets of rotten leaves. That might be because we used to cook our vegetables to death, at least until fairly recently. Brussels sprouts have grown up in the years since. They are now sexy and chic, two adjectives I never thought would apply. 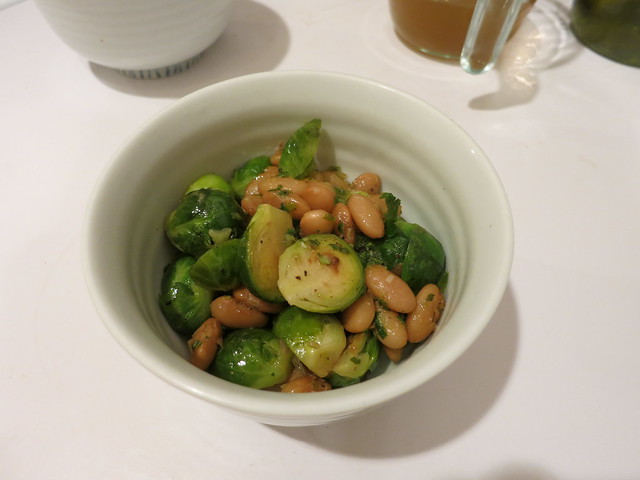 Adapted from Bitter: A Taste of the World’s Most Dangerous Flavor, with Recipes by Jennifer McLagan.

The original recipe uses chickpeas. I also substituted vegetable stock for the chicken stock, although the bean cooking liquid (see step 1 below) will work just as well. 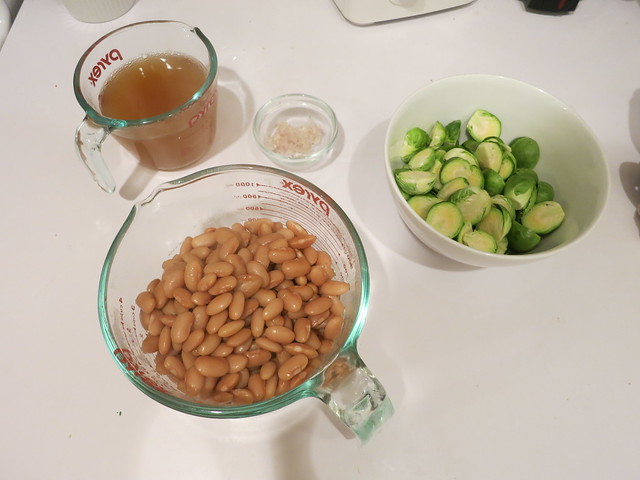 Drain the beans and place in a saucepan with a lid, along with the bay leaf. Cover with cold water by a couple of inches and bring to a boil. Lower to simmer and cook, covered, until the beans are done, anywhere from 30 minutes to over an hour. When they are cooked, uncover the pan, take it off the heat and stir in a teaspoon of salt. Let cool for a half-hour, then drain the beans. Reserve half of the beans and all of the bean cooking liquid for another use.

In a large frying pan, ideally with a lid, warm two tablespoons of olive oil over medium heat. Add the shallot and cook until soft. 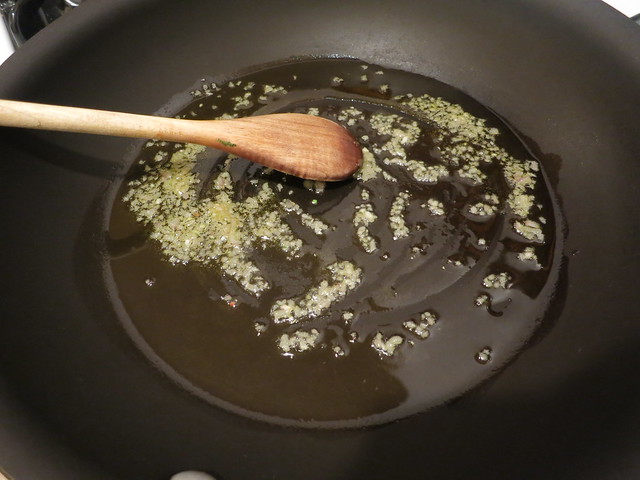 Then add the cooked beans, seasoning with salt and pepper, and sauté until lightly browned. 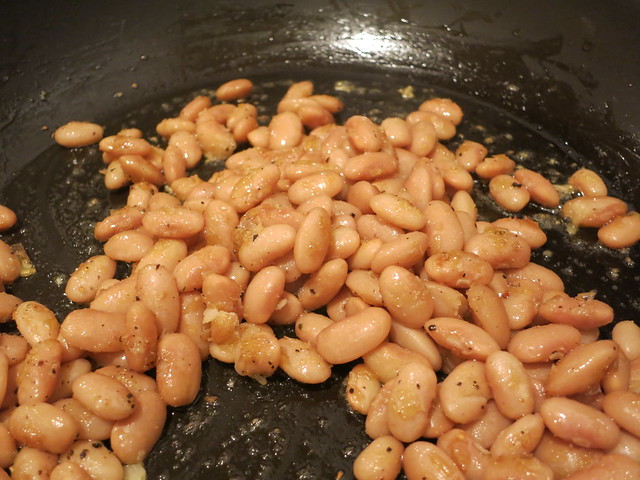 Add 1/4 vegetable stock and bring to a boil, scraping any browned bits off the bottom of the pan. 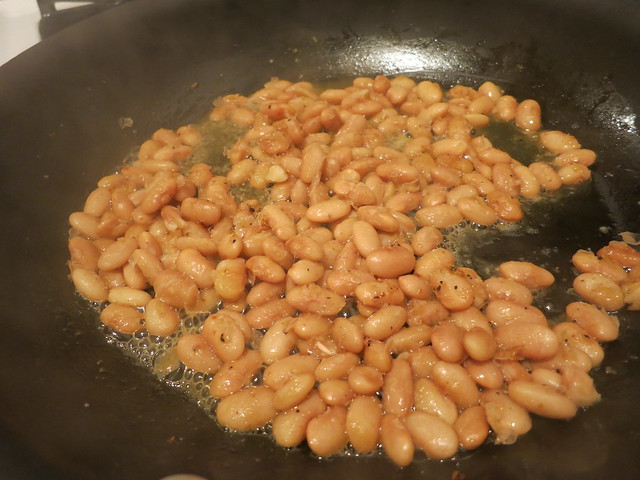 Empty the entire pan into a bowl. 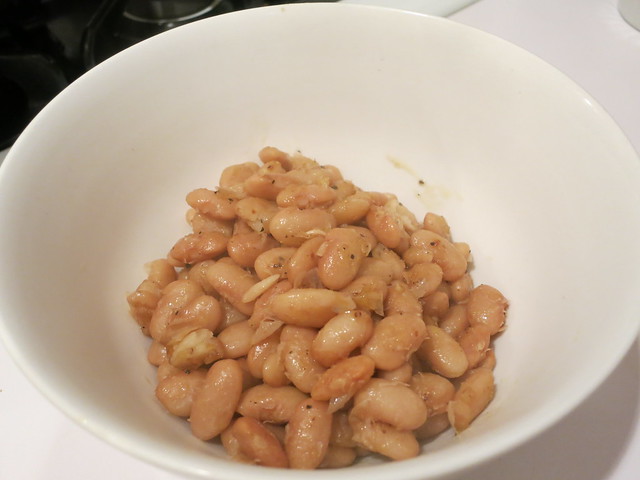 Wipe out the pan and warm the remaining olive oil over high heat. When the oil is hot, add the brussels sprouts, keeping as many as possible cut-side down. 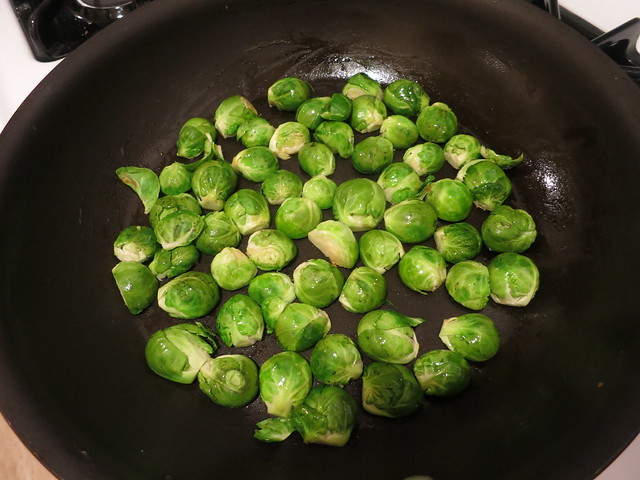 Cook until the sprouts are dark-brown, 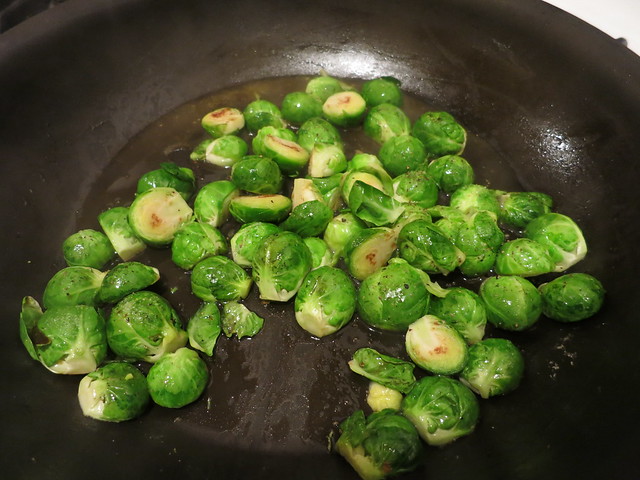 then add the rest of the vegetable stock, lower the heat, cover the pan (if not with a lid, then with foil), and cook briefly until the sprouts are crisp but just tender.

Add the bean mixture to the pan and cook until the beans are warmed through. Pour in the optional sherry and serve hot or at room temperature.

This recipe is sized for 2 to 3 people.

Time: About 90 minutes, not including the time it takes to soak the beans.