Minestrone is a soup that embodies the best of “seasonal cooking”. Its content depends on what’s good at the market, and almost always contains a bounty of fresh vegetables, packed with flavor. You can make it from ingredients that literally cost pennies. It pays for itself after the first meal, as the flavors develop marvelously on the second and succeeding days thereafter.

There are many ways to make minestrone, and those three links are some of my favorites. (You should go read and bookmark their blogs!) The recipe I use is one that’s based on whatever is in season, and sometimes on whether I want it to be vegetarian, vegan or not. Generally, there is a basic template that you can fill in the blanks with just by looking at what’s in your pantry, then winging things from there.

I like to use beans prepared from dried instead of canned. For one, you can control what goes into the soup. For another, you can adjust seasoning to taste. Remember that starches (potatoes, beans, etc.) tend to absorb salt, so keep that in mind if you choose to season the beans before adding them to the soup. 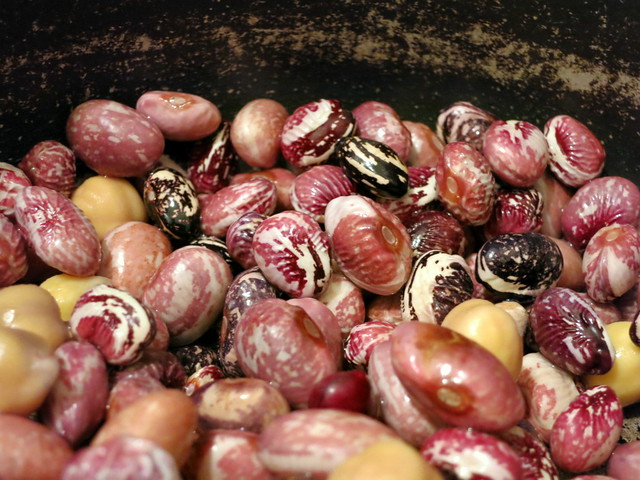 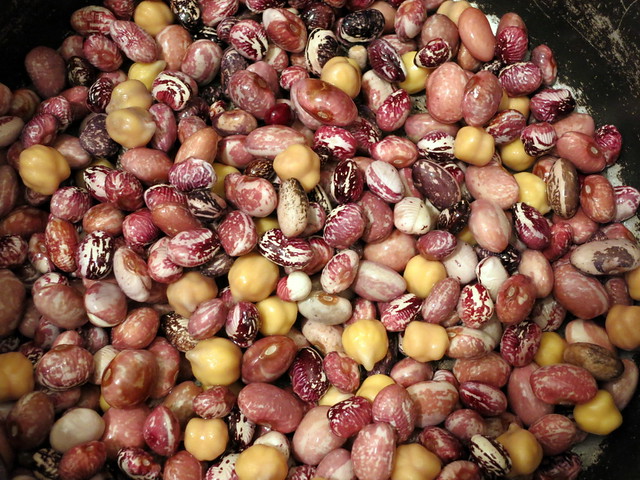 This soup is a fine example where using water is preferable over stock or broth. Why? Because water is a blank canvas that lets you taste the vegetables more than if you used something like vegetable stock, which can sometimes muddle flavors.

And as you can see, it’s a frequent guest at our dinner table. (Click the tiles in the mosaic below to view a larger-sized version along with captions and accompanying text.)

If I recall correctly, this version had fresh tomatoes instead of canned.

The following recipe is adapted from Osteria: 1,000 Generous and Simple Recipes from Italy’s Best Local Restaurants, pages 109-110. It’s a version made without tomatoes and hails from the Piedmont region of northwestern Italia.

Quantities are converted from non-metric. Note that the Osteria cookbook was written for Americans. I prefer to post in metric these days because the United States is the outlier, not the rule.

The original recipe also uses black-eyed peas, fennel and Jerusalem artichokes, all of which I omitted because (1) B hates fennel and (2) I was unable to obtain the other two. I also added some pancetta and onion. Feel free to omit if you prefer.

You won’t have to soak the beans overnight since the soup cooks for several hours.

Begin by frying the pancetta in a Dutch oven in a little bit of olive oil over medium-low heat until pancetta begins to brown. Lift out with a slotted spoon and set aside.

Mince 1 carrot and place in a pot with olive oil, the bay leaf, the celery and leek. Reduce heat to low.

Cook until vegetables begin to break down into a caramelized paste, about 1 hour.

Dice the remaining carrot. After 1 hour, add the beans, chickpeas, cardoons, potato, squash, onion, cabbage, pancetta and diced carrot to the pot. Stir to combine, then add the water. Bring to a boil, then reduce heat to medium-low. Simmer for 5 to 6 hours, uncovered.

Stir the pot every so often. If the liquid reduces too much or if it seems like the soup is drying out, add some more hot water to the pot. When done, remove the soup from heat, taste for salt and pepper, and immediately put in the tagliatelle which should cook quickly. Ladle soup into bowls, drizzle each with olive oil, then serve at once.

This recipe is sized for 6 to 8 people and takes about 7 total hours from start to finish (includes prep time).

It’s a rather extreme version. You can easily reduce the cooking time by taking some shortcuts (i.e., using canned instead of dried beans), but it won’t taste the same in my opinion. There is something to be said for going low and slow.